In my understanding of Buddhism, we human beings have the responsibility to reflect on and critically engage with the causes and conditions that led to our current state. This is not simply a matter of obtaining ‘knowledge’ of history (although that is extremely important), but rather of looking to past circumstances in order to help shape our course (both individual and collective) in the present and towards the future. In some ways, this might be conceived as an extension of Santayana’s well-known dictum that those who fail to understand the past are condemned to repeat it (perhaps, as Marx might cynically add, first as tragedy, then as farce). If I were to reinvent the elementary curriculum, history would be the foundation for education, while everything else (philosophy, politics, economics, anthropology, and sociology, religion, and even the sciences), would be branches of historical study. Perhaps the only subject outside history would be geography, though even that has a historical basis. As Sid rightly said, before he passed on to parinirvana: Things change! Deal with it!

But I digress. I wanted to establish the basis for my interest in genealogy, by connecting basic Darwinian principles to the importance of history in relation to the Buddhist ‘categorical imperative’ to know the causes and conditions that have influenced our present predicament, as individuals and societies. While history (in the normal understanding) is useful for the latter, the former is best served by genealogy. Understood in relation to evolution, ‘deep’ genealogy has important ethical lessons for humanity; most significant being the fact that a) we homo sapiens sapiens are all very closely related; b) we are all ‘Africans’; c) we had intimate dealings with other homo species; d) of which, as late as a mere 40,000 years BP, there may well have been at least four in existence; i.e.,  homo floresiensus (aka the Hobbit), Neanderthals, and two recently discovered species, the Denisovans and the so-called Red Deer Cave people of southern China, the last of whom may have existed until 9500 BCE; that is, about the time of the emergence of agriculture! All of these are beautiful and important facts, whose ramifications have yet to filter into public consciousness, I think—especially the latter, which is the most ‘new’ and also the most astonishing.

While deep or genetic genealogy is still very much in its infancy, it has become possible to have dna tests for both Y-DNA (paternal) and mt-DNA (maternal) ancestors. In both cases, a simple swab of the cheek can reveal the geographical location of your deep ancestors, going back roughly 5000-10,000 years. Of course, what many fail to acknowledge in doing these tests (and occasionally being astonished at the results) is that both test only one line among hundreds, even thousands of genetic ancestors. Envisioned as a wide V with many branches running upwards in the middle, these tests reveal only the extreme left and extreme right outer branches, leaving the entire middle (99% of your DNA) out.

So now that the facts are out of the way, here comes the fun part: interpretation, or, if you prefer, the story. Like all of the subtribe hominina, of course, my earliest ancestors emerged in East Africa, somewhere around Olduvai Gorge in the Great Rift Valley in present-day Ethiopia (where Lucy, our australopithecine ancestress, was found). For unknown reasons, presumably tied to climate change, some of us eventually left Africa, in what appears to be a series of isolated waves. First erectus, then, much later, heidelbergensis (who would give rise to Neanderthals, perhaps the first non-African hominan), and finally, beginning around 80,000 BP, some of ‘us’ (i.e., the ancestors of most present-day non-Africans). Over the next 60,000 years or so, ‘we’ would make our way to just about every corner of the planet, with the exception of remote islands like Hawaii and New Zealand. Most striking in this early human journey is that of the first Australians, who someone made it all the way from East Africa to Australia in an extraordinarily short period of time — perhaps as little as 5000 years. DNA evidence seems to suggest that they hugged the southern coast of Asia, before heading out to sea (unintentionally?) from the Malayan archipelago and arriving on Australia ca. 60,000 BP. Very recent evidence suggests that some (though not all) of this early wave of homo sapiens, which eventually peopled Papua New Guinea, the Andaman Islands, and a few other isolated spots along the route, mixed freely with the Denisovan folk, who had apparently already spread themselves fairly widely throughout Asia.

But these hardy questers were not my ancestors. Mine—part of the Y-Haplogroup known as CT, which had arisen in East Africa ca. 70,000 BP—left Africa at least 20,000 years after the first “wave” (i.e., sometime around 60,000 BP). While we don’t know much about where these folks went and what they did, at least in the short term, we do now know for a fact that, just as with the earlier explorers, they spent some time getting the know the ‘natives’ of west and central Asia; i.e., the Neanderthals. Alas, the Denisovans seem to have disappeared by this time; DNA evidence suggests that the descendents of this second wave, who make up the vast majority of Asians and Europeans, including North and South Americans and Amerindians (i.e., about 88% of the present world’s people), share roughly 4% of their DNA with Neanderthals, but none with Denisovans—whereas Australian aborigines share 6% DNA with Denisovans as well as roughly 4% with Neaderthals. By the way, one of the many things I love about this cascading evidence of our ancestors’ promiscuity with other hominims outside of the mother land of Africa is that it means that of all human alive today, only sub-saharan Africans can lay claim to being 100% human! Not that it means anything to me—I for one am only too proud to be part neander—but take that, racists of past and present!

Once out of Africa, small groups probably went their separate ways, soon another mutation gave rise to the haplogroup CF, which seems to have originated in southwest Asia ca. 55,000 BP. Roughly 7000 years later, another mutation on the Y led to the emergence of the haplogroup F, which would come to dominate the subsequent non-African population. Somewhat surp 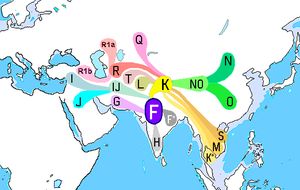 risingly (at least to me), this last mutation appears to have arisen not in West Asia (as might be expected for a line that would eventually enter Europe) but somewhere in south Asia —  likely north India. To the left is a map of the movement of the various subclades of F, from ca. 48,000 BP. Clearly, these ‘Fs’ had something going for them!

Perhaps I had better follow the advice of Monty Python, and ‘skip a bit, brother’. After all, I’m now on my eighth paragraph and still haven’t even reached the last glacial maximum! But I shall press on. As you can see on the nicely colored map, F gave birth to many clades, of which mine is IJ (closest to K, then G & H). IJ arose around 40,000 BP, somewhere close to the Caspian Sea. When I and J themselves parted ways, some 10,000 years later, they both headed West, I going north of the Black Sea and entering northern and eastern Europe, while J (obviously the wiser of the two), entered the Arabian peninsula and largely stayed there (with some small branches eventually settling both shores of the Mediterranean). So ‘we’ finally entered our ‘homeland’, a mere 25,000 years ago. And what poor timing it was — the last glacial maximum (26,000–20,000 BP) was either under way or just about to begin, making most of Europe virtually uninhabitable! Even our Neanderthal cousins, built for harsh climates, did not make it out alive; their ‘last stand’ appears to be in Gibraltar, Spain c. 24,000 BP.