I was born in 1969 and raised in the Maritime province of New Brunswick, Canada by a Scots-Spanish-Filipino mother and Irish-Dutch-Canadian father. Half of my paternal ancestor 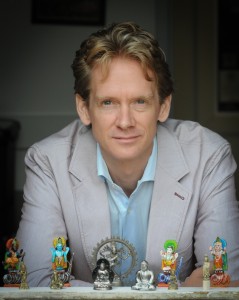 s were Anglo-Dutch Loyalists who fled to Canada during the American Revolution, the other half Scotch-Irish immigrants who left the Belfast area during the Great Potato Famine of the 1840s. On my mother’s side, I have deep roots in the Glasgow area of Scotland, along with ties to a young Gallegan adventurer named Don Juan Antonio de Aenlle y Rocha, who sailed to the Philippines in the mid-19th century and married into a prominent Filipino family, the Burgoses. My parents ultimately met in Montréal, Canada, in the early 1960s, a city that remains, with Kyoto, Japan, my spiritual hometown.

I received a Bachelor of Arts degree in political theory and anthropology from McGill University, Montréal, Canada in 1991, followed by a Master’s of Philosophy from the University of Cambridge (Queens’ College), U.K. in 1993, and a Master’s of Arts in philosophy of religion from McGill University in 1997. In 1998, I entered the doctoral program in philosophy of religion/Asian religions at McGill University. Having been intrigued by a graduate seminar reading of Nishida Kitaro’s Inquiry into the Good, my focus turned eastwards, and in 2000 I received a Monbusho (Ministry of Culture and Education) Fellowship from the Japanese government to study at Kyoto University’s Institute for Japanese Philosophy from October 2000 through July 2002.

My doctoral dissertation, “Critical Buddhism: A Buddhist Hermeneutics of Practice,” analyses various modern currents in Japanese Buddhist criticism in light of contemporary Western ethics and philosophy. This work will soon be published under the title: Critical Buddhism: Engaging with Modern Japanese Buddhist Thought (Ashgate, 2011). While completing my research, I lived and worked for several years in both the old (Kyoto) and new (Tokyo) capitals of Japan, before returning to North America in 2006 to take a position at Bucknell University in Lewisburg, Pennsylvania. While in Japan, I also spent time in mountain monasteries of several Japanese Buddhist sects, including Shingon (Koya-san) and Tendai (Hiei-zan). In 2009, I returned to Japan to undertake new research on modernist and progressive Buddhist movements in Japan during the period from the 1880s through the 1930s.

My academic specializations are: modern Buddhist thought, Japanese and Asian philosophy, comparative ethics and philosophy of religion. I have taught courses in a variety of subjects, including Asian and comparative religions and philosophy, comparative cultures, gender studies and sexual ethics at five institutions in three countries: Canada (McGill University), Japan (Antioch College, Lakeland College, Doshisha University), and the United States (Bucknell University). I am currently Assistant Professor of Comparative Humanities and Asian Thought at Bucknell University in Lewisburg, Pennsylvania, where I live with my wife Sachiko Ikeda, daughter Annika and son Hugh. In whatever spare time I have, I listen to jazz and early punk music, hike, bike, cook south Asian food, and read German and Russian poetry.