A Dream of Red Mansions

I have been absent from the blog for several months due to various reasons, not the least of which is that I have been immersed in reading an extraordinary long work, the Chinese Ming Dynasty classic A Dream of Red Mansions (紅樓夢 Hóng Lóu Mèng; aka Dream of the Red Chamber or The Story of the Stone). It has been my practice for several years now to embark upon a long novel over the Winter break, and I decided in 2008 to use this period biannually to peruse the four Chinese (literary) classics: Journey to the West (2008), Outlaws of the Marsh (2010), A Dream of Red Mansions (2012), and Romance of the Three Kingdoms (2014). 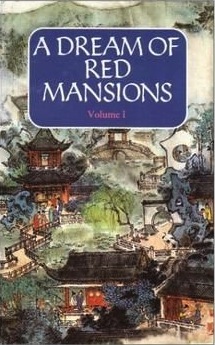 Whereas the first two “novels”, Journey to the West and Outlaws of the Marsh, are rambling tales of adventure, travel, and battle (replete with interesting religious components), Mansions, attributed to Cao Xueqin in the 18th century, is a cat of quite a different color. In length it is similar to the earlier works; in fact, at roughly 1700 pages it is the second longest work of literature I have ever read (albeit far behind Proust’s Remembrance of Things Past, clocking in at 4200 pages, and unlikely to be surpassed unless I choose some day to tackle the entire Indian epic Mahabharata). And yet, in style and tone Mansions could not be more different from these Journey or Marsh; in fact, it is much closer to Proust in this regard, as well as The Tale of Genji, which precedes Mansions chronologically by some 700 years but is also rooted in the confined and claustrophobic world of the courtly elite. Personally, I found Mansions a frustrating read, largely because the number of sympathetic characters is miniscule, but also because even the interesting characters do not develop very much, if at all, throughout the story. There is no “plot”–and while the same could be said of both Journey and Marsh, the pace of Mansions is generally slow as death. And speaking of death, that is a major theme of the work; perhaps it can be best described as an extended meditation on the fleetingness of human life, even in the most prosperous of families.

Getting back to the characters of the story, while the central protagonist, Pao-yu, can hardly be described as anything other than a preposterously coddled boy-playboy (a Genji in the making, but with less sense), many of the female characters do show a spark that I appreciate. Pao-yu’s ill-fated love—his Albertine, as it were—Taiyu, is essentially his mirror image: vain, selfish, eretheic, though both less coddled and less kind. But other women that surround him, such as the indefatigable Pao-chin, who becomes his wife; outspoken His-jen, Pao-yu’s primary maid and sometime lover; Miao-yu, the aloof but sensual Buddhist nun; Hsi-feng, the comely ‘shrew’ who effectively runs the household; and ‘Granny,’ the matriarch who effectively controls the entire household, are far more intriguing, and more fully developed as characters. As in Genji (which was, of course, written by a woman, Muraskai Shikibu), this elite world is a world dominated by women, with men acting as largely irrelevant appendages that show up from time to time, almost inevitably bringing trouble to the household. The most interesting male figure is undoubtedly Pao-chin’s brother Hsueh-pan, the amorous bisexual rake and bully who is constantly bringing shame to the family (but also enlivining the frequently dull narrative!)

In short, while I am glad to have finally read this masterpiece of East Asian literary history, I am also happy that I will never have to read it again.