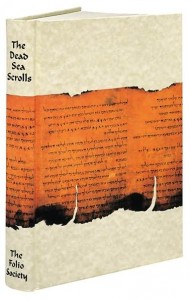 I wish I could get excited about the Dead Sea Scrolls, but frankly, I’m having great trouble doing so. And this is from a guy who generally loves sacred texts, for all their weirdness and ‘human, all-too-human’ aspects. Just the other day I was raving to a friend about the Vedas with their longing for the ‘lost’ hallucinogen, soma, and how, even if I opt to raise my kids as Buddhists (whatever that means), I will insist that they read the Bible, carefully, from a youngish age (and yes, Nietzsche, both the Hebrew Bible and its lesser “Greek appendix”). But alas, for all their promise of intrigue and messed-up apocalyptical mysticism, the DSS proved to be little more than a repetition of the worst aspects of the Hebrew and New Testament scriptures; i.e., all the sado-masochistic rants about God’s heavenly wrath without the astonishingly beautiful poetry of Genesis (including the fascinating characterization of the man-child-god YHWH), the powerful females and deeply-flawed male leads of Genesis, Exodus, Kings and Chronicles, the overt eroticism of the Song of Songs, or the penetrating psychological insights or Ecclesiastes or Paul’s letters (at their best). Even the apocalyptic flights are boring in comparison with the horrid and seemingly drug-induced nastiness of Revelations. And much of it reads like Psalms; a biblical book that, with apologies, is a repetitive snore-fest.

After all, the Essenes, who wrote this text in their cave-retreat of Qumran while the harsh Roman occupation was ushering in a greater messianic sensibility among many Jews, played an important role in setting the stage for the asceticism and apocalyptic sensibility that characterize the Ebionim (or early Christian) movement. And indeed, the texts incorporated into this volume do strike tones that seem remarkably “Christian”—which proves the point that the followers of Jesus and Paul , while certainly stretching the meaning of orthodox Judaism, were not by any means unique in their ideas and practices. In fact, I tend to think of the early Christian movement as an interesting amalgam of the main currents present in Judaism of the period leading up to the destruction of the Temple in 70 CE: 1) a ritual/sacrifice component that could be a legacy of the priestly Sadducees; 2) a strong ethical component that hearkens to the Pharisees and just emerging rabbinic movement; and 3) a messianic/apocalyptic complex that can be traced to the Essenes and like movements. Just about the only thing the early Christians do not seem to have adopted is the political aspect of the Zealots/Sicarii (though Judas’s presence among the disciples, however bad things turned out in the end, might suggest a connection here; after all, he is called ‘Iscariot’).

Still, I was expecting more from the Dead Sea Scrolls. The most interesting parts were the cryptic remarks about their past hero/founder, known as the Teacher of Righteousness, his foe, the Wicked Priest (probably Jonathan Maccabaeus), and the two Messiahs or the future. Some of the language is also quite rich, including the trope of God circumcising the hearts of the true believers. Ouch!

This entry was posted in Uncategorized. Bookmark the permalink.