The Nature of Gothic

I plan to use these posts to unload random thoughts on any and all topics, especially  those connected to the six interlocking spheres most important to me: philosophy, religion, ethics, politics, literature, and the environment. I have no idea if anyone besides myself will ever read them, but that is of little concern to me. 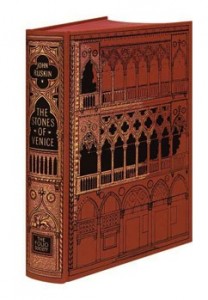 Let me begin with a few thoughts on a book I am currently reading, John Ruskin’s The Stones of Venice (1851–53; Folio Society edition, 2001). My appreciation for Ruskin goes back to the very beginnings of my academic career. In my senior year as an undergraduate at McGill, I wrote an  joint honor’s thesis on Ruskin and his influence in 19th and 20th century politics and social theory: ‘No Wealth But Life’: Art & Nature in Left Cultural Politics from Kant to the Frankfurt School (see excerpt below). Besides being a decidedly eccentric personality, Ruskin was a fascinating hybrid of cultural currents: a Romantic who disdained the heavy-handed forms of the Renaissance in favor of the spirit of “Gothic”; an unabashed aesthete who was also an quasi-Christian moralist; a cultural conservative who developed one of the earliest (and non-Marxist) analyses of labor and alienation; and a writer whose frequent flights of over-the-top prose belie a steady commitment to the virtues of temperance and restraint. I see the trace of Ruskin in many of my favorited 19th century figures and movements: the Pre-Raphaelite Brotherhood, William Morris, the Arts & Crafts Movement, Walter Pater and Oscar Wilde.

The Stones of Venice is generally regarded as Ruskin’s magnum opus, and the chapter “The Nature of Gothic” provides a succinct distillation of his central moral/aesthetic concerns. Here Rusking outlines the “moral elements of Gothic”, as follows: 1. Savageness or Rudeness; 2. Love of Change; 3. Love of Nature; 4. Disturbed Imagination; 5. Obstinacy; 6. Generosity. Without going into the details that Ruskin goes on to provide, let me say that these are six values that I, too, hold as ideals – which perhaps explains my love for his work.

The following is a short excerpt from my essay, “No Wealth But Life.” Though I wrote this two decades ago, I stand by my argument with regard to Ruskin’s applicability today:

Ruskin was heir to a particular brand of British Romanticism (via Thomas Carlyle), and he was also very much a Victorian in his reflection upon the ills of his society. With his aesthetic grasp of the human condition, however, Ruskin was far from common, and it is this aspect of his work that has most relevance, and which is often cited when Ruskin is hailed as a prophetic figure. Like Marx, Ruskin witnessed first hand the wrath of capitalist industrialism, and turning from his artistic background felt compelled to speak out on social issues, without ever losing his background in aesthetics or his love of beauty and human creativity. Speaking with unabashed contempt of all the so-called ‘higher practical achievements’ of his century, Ruskin viewed Victorian cities as “so many working models of hell.” He launched a full-scale assault upon orthodox political economy, which in his view was entrenched in capitalist, utilitarian-technological principles of calculation and exchange-value. Ruskin, then, follows Carlyle in the denunciation of the Machine Age, but his critique extends further to a more general attack on post-Enlightenment scientific and rationalist thought. At once an outcry against social injustice and inhumanity, Ruskin’s work is also a direct assault upon the “bastard science” of political economy, which mechanizes, isolates, and fragments human beings and society, producing in its wake a vast impersonal machine of separate, self-interested atoms.

Industrial machinery, says Ruskin, is only the most concrete manifestation of a way of thought that renders life impure. Human beings and society must only be understood as complex and multi-faceted organisms, rather than as Ricardo’s homo oeconomicus, which for Ruskin is an insult upon human dignity. Mechanical development in the Machine Age subdued humankind to a state of spiritual slavery, whereby development gains priority over human happiness and quality of life. Ruskinian critical theory has its base in one central tenet immortalized in his essay “Unto This Last:” There is no Wealth But Life. For Ruskin: “Intrinsic value is the absolute power of anything to support life. Exchange value is merely the price the possessor will take for it, and they are not identical. The exchange value of a cannon ball and a pudding may be the same but their intrinsic value is not. To exclude intrinsic value from economic calculations is unscientific.”

Life, says Ruskin, in its totality, must be the end and aim of consumption, as well as the focus of any true political economy. Here Ruskin borrows from Edmund Burke, adding social affections and moral factors into political and economic calculations, not as sentimental whim but on the basis of scientific procedure and common sense. The questions of art, economy, and politics cannot be separated from each other—or from the questions of morality and ethics.

Essentially, Ruskin sees, at the roots of the central problems of his day (the dehumanization of humanity in poverty, ugliness and squalor), not a certain class of people, but, first, a philosophy based on a mechanistic account of human nature, and second, a belief in liberty when the reality of depravity made such a concept hollow and useless. As well, Ruskin mentions a third problem: the (Mandevillean) conviction that communal prosperity can only be achieved by the pursuit of individual self-interest. Fro Adam Smith to Malthus to Mill, Ruskin combated the liberal democratic vision of humanity as the sum of his own interests, detached from a social context. “Unto This Last” was written with the dual purpose of giving a logical definition of wealth and to show that the acquisition of wealth is possible only under certain moral conditions of society. In particular, Ruskin voraciously attacks so-called progress that, based on an incorrect notion of wealth and prosperity, cannot help but be disastrous to humanity in the long run. A true definition of value, he suggests, would be one based upon the original Latin root (valorem)—a word that means to be strong or valuable for someone or something. Value, like wealth, must be concerned with, or avail towards, life.

Ruskin’s aesthetic background is fundamental to his life philosophy. A society so dedicated to squalor and heartless brutality, he says, cannot help but be indifferent to all praised of beauty. Drawing a link between morality and the realm of beauty, Ruskin sees in art (especially Gothic, i.e., pre-industrial, art and architecture in particular) the achievement of an equable relationship between human creativity and the given world. As a mediaevalist in both aesthetics and social theory, he sees in the idealized picture of the mediaeval European craftsman and his village a prototype for all human artistic and social fulfilment. Yet art must have a purpose, which is ultimately to “get the country clean and the people beautiful.” An aesthetic principle for life not only benefits humanity directly, but also indirectly, by enjoining the beautification and sustenance of nature. Ruskin broadens the concept of art by enlarging the formal emphasis on beauty to cover a whole range of human (and non-human) experience.